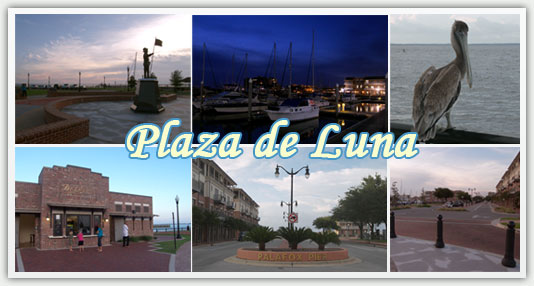 Those of you who grew up in Pensacola probably have many memories of the Bayfront Auditorium (Pensacola Municipal Auditorium). It sat at the end of Palafox Street from 1955-2005 overlooking Pensacola Bay. For 50 years, the auditorium hosted concerts for everyone from Elvis and Jerry Lee Lewis to Tori Amos and Puddle of Mudd. It was the place of my first exposure to a punk band on a Christian label when in 1996 I saw MxPx of Tooth n Nail Records.

However, after extensive damage from Hurricane Ivan in 2004, it was decided that it needed to be torn down. On July 24th of 2005, demolition was completed and the debris was used for fishing reefs in Phase 2 of Project Greenshores.
Thanks to the City Council’s Pensacola Waterfront Development Plan 2000, the beloved Bayfront Auditorium was recycled into offshore reefs and we also have more waterfront access right in the city.

The former home of the Bayfront Auditorium is now Plaza de Luna. This waterfront park of over 2+acres and 1200 ft for fishing was named after Don Tristan de Luna, the Spanish explorer who established Pensacola in 1559 as the first European settlement in the United States.

Now, rather than seeing an indoor concert at the end of Palafox Street, I am able to experience more of the natural beauty that Pensacola has to offer. This is a place to fish in the Pensacola Bay and so much more.
I recently took a trip to Plaza de Luna after picking up my children from school. I didn’t have to drive to the beach to let the children cool off and relax after a long day of school. Right in the city, they were able to spend more than an hour of outdoor play with a great view of Pensacola Bay.

The children and I enjoyed watching the many species of birds that spend their day on the Palafox Pier or the grassy lawn of the park: Pelicans, Seagulls, Pigeons, and Blue Heron.

Besides birdwatching, the kids spent a lot of time playing in the interactive water jets of the fountain area. And, I didn’t mind taking off my shoes and cooling off in jets too. When I did sit on the surrounding brick wall to watch the kids at play, I noticed the plaques that dedicated the park as well as the original dedication of the former Pensacola Municipal Auditorium or Bayfront.

Another part of Plaza de Luna is De Luna’s permanent concession stand which also has restrooms and outdoor showers. The concession serves food and drinks from 11:00am until 8:00pm. Fishermen have food and restrooms readily available to them. Professionals working in the downtown area can come order a delicious lunch or have it delivered between the hours of 11:00am-1:00pm. You can place orders by caling 262-0331. If you are at the park just to relax and play as we were, they offer nachos, slushies and icecream.

There is something here for everyone. Come during the day or in the evening to watch the sunset at Plaza de Luna.